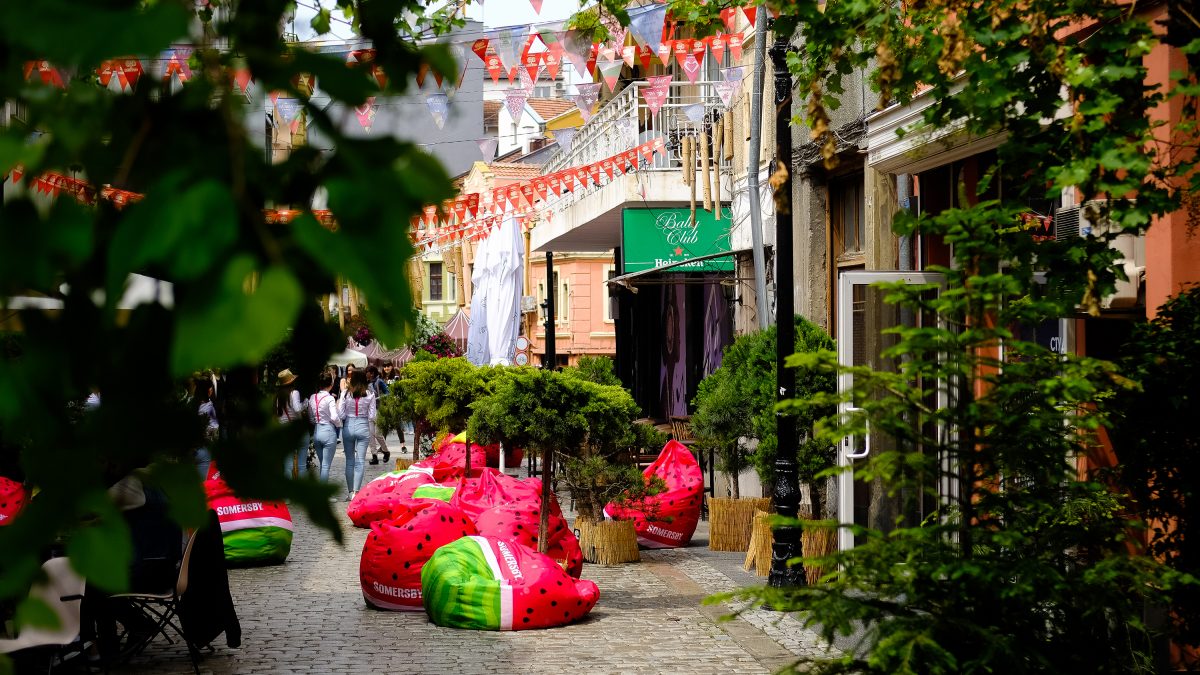 Plovdiv, as its motto “Ancient and Eternal” suggests, supports and sustains the continuation of many traditions. And what could be more eternal for humanity than music and culture? Let’s check the best annual events in town!

Annual events on the Youth Hill

There are many annual events that happen in the city. Here are some of the most renowned, sorted by no particular order than location.

The most versatile event location is fittingly located just beyond the north face of our most mystical and highest hill, now called Youth Hill. The fields there are open to hosting all sorts of events. Of course – the location’s versatility comes with upsides and downsides. The versatility comes from the fact that the fields are given they are – meaning people have full freedom to make whatever kind of event they like, as long as they build the infrastructure themselves. You can see them transform 180° from one weekend to the next, coming to show the variety made possible by people who want to have fun together.

Events such as Plovdiv Beer Fest, showcasing the many aspects of beer culture such as craft beers and delicious food, and Shake That Хълм, a three-day music marathon with two separate stages and differently themed nights, happen there within days of each other.

Also, the Festival Fields are host to the Lost Age festival. That is a weekend-long opportunity to take a glimpse at medieval life and culture – at least from our rose-spectacled 21st-century point of view. During it, you can see a reenactment of battles, stalls selling traditional arts and crafts and chase it all down with a medieval beer, ale or mead all while listening to the best Bulgarian medieval-themed bands. It’s an important meeting grounds of historical reenactment and LARP culture.

Keeping with the musical theme and moving to the Rowing Channel, a 2,2-km long artificial waterway on the east side of the city, Hills of Rock comes to mind. It is the biggest Rock and Metal festival in Bulgaria. Fans from all around the Balkans make a weekend-long pilgrimage to see their favorite bands play. This is not an understatement, as bands such as Sabaton, Iron Maiden, Judas Priest, Evanescence, Three Days Grace and Guano Apes have played in recent years since it has been kicked off in 2017. Prominent Bulgarian bands such as Bobo & The Gang, The Black Swells, D2, Odd Crew and Hypnotik Ink also took part.

Last year, the festival had a ‘dark side’ as well, when with the turn of midnight one of the stages changed styles and turned into “Hills of Bass”, a two-night long Drum and Bass & Jungle festival. Fans of breakbeats and electronic melodies were delighted by performers such as Goldie, High Contrast, Matrix & Futurebound, Friction, Calyx & Teebee, Agressor Bunx, Dynamite MC и Linguistics. They were not left without support from the local DnB scene, in the name of the HMSU artists L 33, High Roll, Ogonek, Acidtrip, Targy, EXo and Faith.

In the Ancient Roman Theater

Our most famous event venue, the Ancient Roman Theater, is not to be forgotten. It is the happy host of many events, such as Opera Open and Sound of the Ages.

Opera Open is a modern development of ancient theatre tradition, with a wink to the open nature of Plovdiv’s Ancient Roman Theatre. It happens every summer from June to August.

Sound of the Ages is a music festival that also takes place in the Ancient Theatre. Many classic legends have played there, such as Nazareth, Placebo, Apocalyptica and Accept, as well as progressive metal bands like Sons of Apollo and Opeth.

Annual events in the Old Town of Plovdiv

Returning to the Old Town, that is the place where the annual Young Wine Festival happens. The festival showcases and promotes Bulgarian wine production and traditional Bulgarian food. 16 Bulgarian wineries and 6 Revival houses in the Old Town started the tradition in 2009, and ever since the festival gives the opportunity to Plovdiv and city guests from over 50 countries around the world to touch the history and culture of Plovdiv. Over 25 000 people come from all around the world to taste young wines from all the corners of Bulgaria and experience the modern development and ancient roots of one of the oldest winemaking traditions in the world.

Moving from the Old Town to Kapana district. A neighborhood with an interesting history and a lot to offer. In everyday life, you can enjoy your time in Kapana thanks to all the charming ateliers, shops, galleries,
cozy cafeterias and restaurants. But each year the district transforms into a stage for the Kapana Fest. There are several stages with a variety of concerts and performances happening on them. Music, sport, different discussions take place during the festival. There is also an amazing bazaar where people can find beautiful (and tasty) handmade goods. Kapana Fest is something no one wants to miss.

Moving our eyes to the Drama Theatre of Plovdiv. It’s situated halfway between Kapana and the Youth Hill. We can see many wonderful theatrical, indoor events there as well. It functions year-round, providing quality cultural entertainment for people of all walks of life wanting a break from their monotonous environment and something more… fulfilling and enriching.

One festival which it hosts is Scene on a Crossroad, which accommodates many theatrical performances from all around the country. It takes place during the month of September, as a showcase of the country’s theatre scene’s best.

Another festival that happens inside it is One Dance Week. It’s a weeklong free-entrance showcase of some of Europe’s finest contemporary dance acts.

Regardless, the Drama Theatre is open and provides quality experiences year-long (excluding the months from May to August, when all the most self-respecting artistic minds take a seasonal vacation to revamp their creative spirit).

Oldie but Goldie – the International Fair of Plovdiv

In 1892 the first Bulgarian Agricultural and Industrial Exhibition was organized in Plovdiv. The successor of that event is the International Fair of Plovdiv. In the 1930s the fair in Plovdiv acquired the status of a National Exhibition Center of Bulgaria. Ever since it is among the leaders of the exhibition industry in Southeast Europe. The International Fair of Plovdiv organizes multi-branch and specialized business forums every year, including the national participation and presentation of Bulgaria at several world exhibitions.

One of the annual events can not be categorized by location. Because it’s happening all around the city. The festival Night (or The Night of the Museums and Galleries) was organized for the first time on a large scale on September 30, 2005, in Plovdiv. It became an annual event and a favorite one of all Bulgarians. Several nights in a row everyone can visit different museums, galleries and enjoy a huge variety of performances all around the city. The event is famous for a very rich cultural program.

These are some of the most prominent annual events in the city. However, without a doubt, every trip to Plovdiv can be a wonderful experience. It’s just up to you to create your own adventure and choose your own approach to the prism of perception which forms your reality.