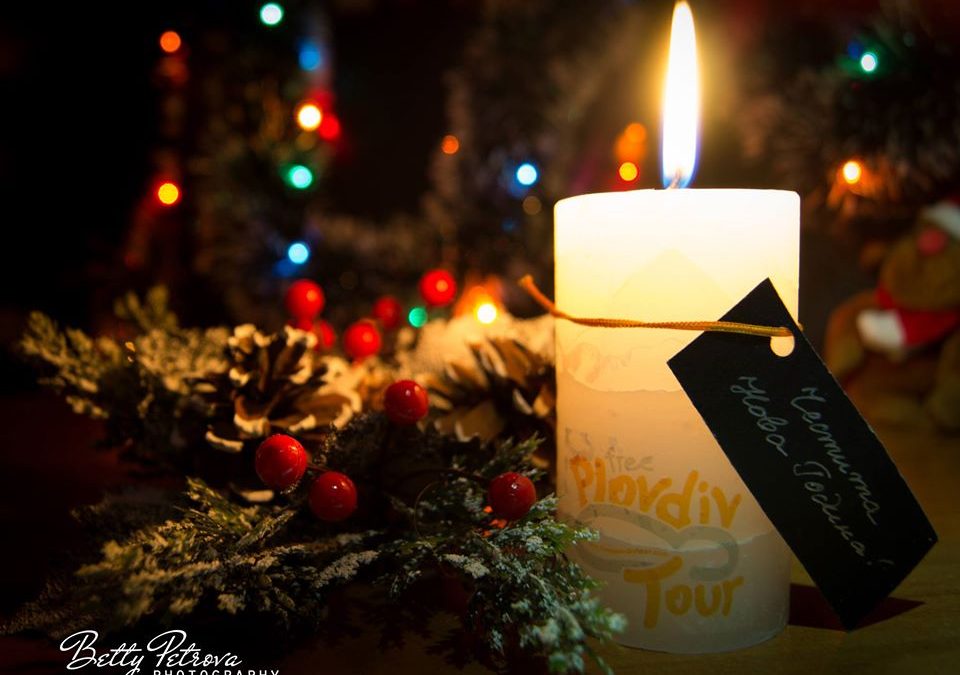 As you will see in one of the next paragraphs, Bulgarians have many traditional holiday meals. However, two of them are much than just food on the table – the Christmas bread and the banitsa on New Year’s Eve. Both of them are connected to entire rituals, which determine the fortune of everyone around the table.

Perhaps the most awaited moment during Christmas Eve dinner is the breaking of the specially decorated Christmas bread. Not only because it’s super tasty – but there is also a treasure, hidden within. Every year the matriarch of the family puts a coin, wrapped in tinfoil within the dough. It is believed that whoever finds the coin within his piece of bread will have fortune and wealth throughout the coming year. Be careful when taking large bites though – or else you might end up breaking a tooth or two!

A similar ritual occurs on New Year’s Eve as well. One of the obligatory meals on this holiday is the banitsa. It is a typical Bulgarian filo pastry with eggs and cheese and it is absolutely yummy! What is special here, however, is that on New Year’s Eve every slice of the banitsa contains a small lucky charm, written on a piece of paper (similar to a fortune cookie). These charms usually include some funny rhymes and are said to determine what will happen to the person during the coming year. Whether it’s something ordinary like robust health, a new car, etc., or a more untypical thing – such as a lottery win or a marriage and a baby – these charms are often the source of much laughter around the dinner table.

The traditions of koledari and survakari date back centuries ago and are an integral part of Bulgarian folklore. Nevertheless, they could still be observed today, especially in smaller towns and villages.

The koledari are something like our own folk version of the carol singers. According to this tradition, all the young men dress up in traditional Bulgarian clothing and meet in the town center at midnight on Christmas Eve. During the rest of the night, they visit every single house and sing Christmas songs to the owners as a ritual for good fortune. The koledari themselves are in turn rewarded by the hosts with Christmas bread and wine.

A similar tradition, known as survakane, could be observed on New Year’s Eve. However, in this case, the participants aren’t young men, but rather children. Thus it could be seen as something similar to the Western tradition of „trick or treat“ on Halloween. During the night on the 31st of December the children, called survakari, visit the houses in the neighborhood. Each kid carries a specially decorated dogwood branch, known as survachka. Once invited inside, the children start… beating the hosts on the back with the branch, while singing songs and reciting rhymes! It is believed that receiving such a „beating“ will bring a person robust health throughout the year.

After they are done singing and reciting, the children receive money and sweets from the hosts. What is specific for these two traditions is that both of them take place on the outside at night during the winter. So all the enthusiasts should be well-equipped with warm clothing!

A Meal for Christmas

There are a number of classical Christmas Eve meals in Bulgaria. Unlike in many other countries, our traditions dictate not to serve meat – or any animal products, for that matter – on the table on the 24th of December. This, of course, limits the options quite a bit. The most typical Christmas Eve meals are the aforementioned Christmas bread, bean or pea pottage, rice with vegetables, roasted potatoes, pumpkin, walnuts, dried fruits, salads, etc. It is obligatory to have an uneven number of meals on the table – usually 7, 9 or 11.

This is not to say, however, that the Christmas holidays are completely meatless. Meat is to be served during the Christmas lunch on the 25th of December, which is almost as important as the Christmas Eve dinner. It is typical to eat pork because in old times it was a tradition to slaughter a pig in the early morning. Nowadays, though, most people prefer to avoid this bloody business and simply buy some steaks from the supermarket instead 🙂

No Christmas Eve is complete without the warm glow of the embers in the fireplace. It is true that nowadays most people live in apartments, equipped with much more modern heating systems. But if you want to experience Christmas in a truly traditional way, your best option is to celebrate in a nice and cozy village house – preferably somewhere up in the mountains! If you opt for such a celebration, there is one very important tradition to bear in mind. Before the festive dinner on Christmas Eve the fireplace should be loaded with the so-called badnik.

The badnik is a huge chunk of wood – usually oak or elm. It has to be large enough so as to keep burning and warming the house throughout the entire night up until Christmas morning. Then, according to tradition, it should be extinguished by pouring wine on top of it. The ashes from the badnik are not to be thrown away in the trash. Rather, they are to be spread around the garden in order to bring fortune and wealth to the inhabitants of the house.

These are just some of the Christmas and New Year’s Eve customs in Bulgaria. If you happen to spend these holidays with Bulgarian friends you will definitely experience some of those traditions since we are very fond of them and they are an essential part of having cozy and heartwarming winter holidays.

Have a Merry Christmas and a Happy New Year from the Free Plovdiv Tour Team!